Thank you for visiting Curtis Stokes Yacht Charters on the web. We look forward to hearing from you soon and giving you the personal service you deserve!

New England is a prime charter area in the summer and fall. The weather is good, the scenery delightful, the onshore amenities plentiful and cruising a joy! 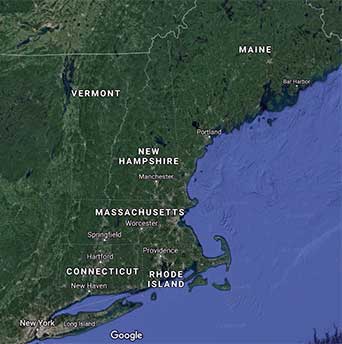 New England offers lots to do on charter, even water sports. In summer the waters are warm enough for swimming, water skiing, stand up paddle boarding, kayaking and most anything else you can think of. All kinds of fishing abounds here both near and off shore.

Then there is going ashore to enjoy the rich culture of whaling towns, lobster and other fishing towns, beach towns and more. This area was the start of the colonial United States and still holds onto cobblestone streets, town squares, taverns, restaurants and historical land marks.

Restaurants abound with lobster and more seafood as the main event. Sit in historical restaurant locations gazing on the waterfront. Eating, relaxing and soaking up the local ambience makes this trip worthwhile.

Newport, Rhode Island Newport is one of those yachting cross roads where every yacht goes sooner or later. Yacht regattas, booming holidays and world famous tennis are but a few of the attractions to this island community.

Bar Harbor, Maine was at one time the place to go for the wealthy. In 1947 a wildfire burned many of the summer retreats built by wealthy Americans but the town itself survived intact. Bar Harbor is close to Acadia National Park which has hiking and biking through the park. Restaurants with the famous Maine lobsters are plentiful. Kayaking and whale watching are amoung the diverse opportunities for visitors to Bar Harbor on charter.

Block Island, RI with its Moorish landscape, combines rolling hills and rugged ravines. Explore this beautiful island itself or the many shops, galleries and Victorian hotels in its picturesque towns. The island also takes pride in its commitment to the environmental conservation – today about 25% of the island is protected open space. The Northwest tip of the island is an undeveloped natural area and resting stop for birds along the Atlantic Flyway. Two lighthouses frame Block Island, the Southeast Lighthouse, located directly off of Spring Street on the Mohegan Trail and the North Lighthouse, at the end of Com Neck Road. The North Light warns boaters of dangerous shallow waters of Sandy Point reef which has claimed many vessels over the years. During the Summer, you can climb a staircase to the top of the Southeast Lighthouse for a fantastic view of the Mohegan Bluffs and the Atlantic Ocean below.

Cuttyhunk, MA This jewel of the Elizabethean Islands has one of the most picturesque harbors in all of New England. Cuttyhunk Island was discovered by Bartholomew Gosnold in 1602 and is the most westerly of the thirteen Elizabeth Islands that stretch westward from the elbow of the Cape. Gosnold's account of his island discoveries in the New World (he also named Cape Cod and Martha's Vineyard) is said to have served as the basis for Shakepeare's play The Tempest. The rolling hills of bayberry and grasses, with deer-strewn paths for hiking and ocean views as far as the eye can see are alluring. It comes as little surprise, then, that the peaceful island's motto is, "If you can't relax here, you can't relax."

Plymouth, MA Ever famous for being the place where the Pilgrims first landed when arriving in the New World, Plymouth is a town overflowing with historic significance, natural beauty and old-world charm. It seems that history can be found at every turn, from museums to historic houses and old farms. Plymouth Rock, the storied landing place of the Pilgrims, and Plymouth Plantation are two of the most famous destinations in Plymouth. A trip to Plymouth would be incomplete without stepping onto the Mayflower II which can be found in Plymouth Harbor

There are many more towns and islands throughout New England to explore. Consult with the captain for the best spots to visit on your yacht charter.

Contact Us to plan your New England Charter vacation soon.